After the user types the results of a game into the corresponding field, World Cup 2006 Tournament Calendar highlights the winner and makes changes in groups and standing of each contestant. Just one glance at the page is enough to see the effected changes and the general course of the tournament. Clear presentation and a comfortable page layout provide instant insight into the current status quo. The calendar will lead you through all five rounds up to the final. It helps calculate the game outcome that brings your team into the next round of the tournament. You can make informed predictions and quickly spot the chances for your favourite team. With World Cup 2006 Tournament Calendar you will make the most of the key football event of the year.

World Cup 2006 Tournament Calendar is available free of charge from the Excely.com internet site. The calendar speaks 43 languages and supports different time zones. Just download it, extract the archive and enjoy the comfort of the automated game calendar.

Test the final stages results to see what results your favourite teams need to qualify for the play-off stages. This way, you will make your own prediction, amazing your friends with all the posibilities you can find, without having to wait for the press to publish their analysis. 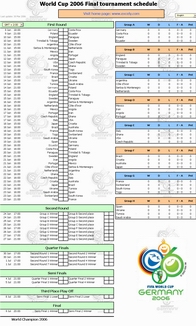